What stands QGIS apart from ArcGIS is the speed at which the community and developers run to help you, compared to the ESRI help centre, where I have been told “No” several times, the QGIS developers always seem to ask “What if….”

Last week I posted about the ArcGIS Style Management and how to improve consistency and said that QGIS wasn’t quite there….I was wrong…kind of…. I stand by my statement that the current version of QGIS is a little clunky BUT having seen these screenshots and images of what is coming in QGIS 2.0, I feel that ESRI might now be wondering how they can charge so much for their software. Many thanks to Anita Graser & Nathan Woodrow (from who I blatantly stole the following text) for their continued help with QGIS.

Recently there have been some great new additions to the QGIS project. Being part of such a fast moving project is a great feeling, and it’s only going to get better.

This post is going to be a quick over view of some of the newer features that I really like.

Well of course I like this one, I just added it. The reason I added this feature was because I really wanted to way to have popup images on the map canvas for flood damage reports on roads. I also wanted it dynamic so I could use template like syntax to replace values at run time.

The HTML annotations use QtWebKit and as a result support full HTML, CSS, and Javascript. The HTML can contain a QgsExpression – the same expression used in the expression labels and layer actions – inside [% %] which is replaced at run time with the data from the underlying feature e.g. [% "roadname" %] 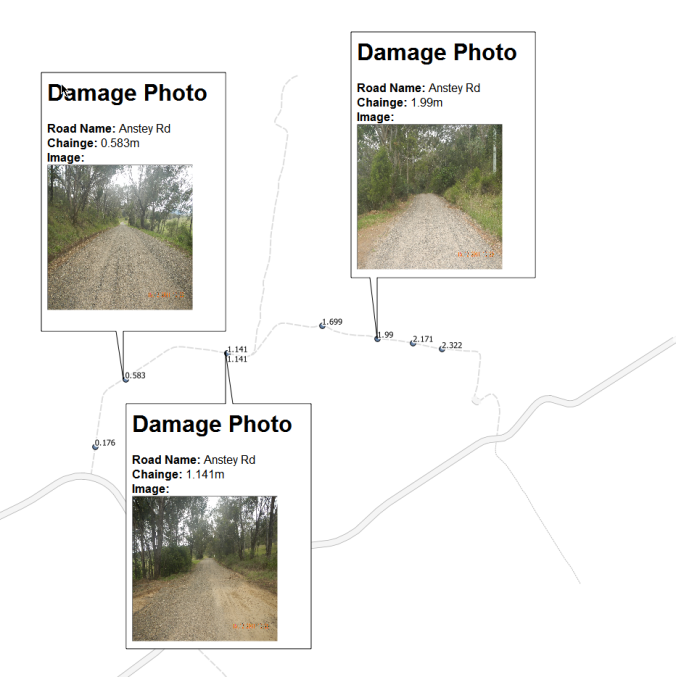 I’ll let you think of some nice use cases for this new addition.

This new feature comes from Giuseppe Sucameli of faunalia with the work done for ARPA Piemonte.

The task was to add Python macros that run when a project is open, saved, closed. As a side effect of the task the issue of security was raise and how to notify the user that macros are going to run.  For me this was less about security and more about how to present that information to the user without annoying the crap out of them. Most of the time popup dialogs in software are a anti-pattern and are often abused for tasks like this. So knowing I would throw my computer out the window if I had to dismiss yet another dialog I suggested a less intrusive method being used a lot these days. The handy slide out notification bar. Giuseppe  was very welcoming to the idea and implemented it nicely.

Of course this addition can also expanded into other areas of the program. My first plan is to use it for notifying the user of plugins to failed to load.  There is nothing in QGIS that annoys more then starting and seeing this: 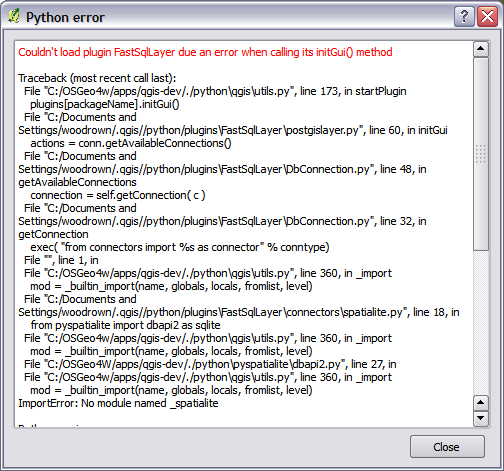 To make matters worse if more then one plugin fails to load then I have to dismiss each dialog. So we can now use the notification bar to present it to the user in a nice non-blocking way. Something like “BTW four plugins failed to load at startup. What would you like me to do?”

I’m working on a patch  to move this stuff into the notification bar just no ETA at the moment as I’m a bit busy.

Larry Shaffer has been working on some great improvements to the new labeling engine in order to make our maps look a lot more professional. Larry has been doing a lot of work in this area and is still going so I’m not going to go into all the details. However one new labeling feature that I really like is the ability to to set the  spacing between letters and words.

With a little bit of spacing

There is also the new ability to set the transparency of the label and the buffer.  The buffer transparency is something that I really like as sometimes you need a buffer but a solid buffer can then block out your map features; by adding a 45% transparent buffer I still have the labels pop off the map but not in your face or blocking features.  It’s hard to make a picture to explain it well so you’ll just have to experiment.

This one could be quite handy for people that make a lot of maps with the same base data. Thanks to Etienne Tourigny QGIS can now load projects as a template. This means you can create a project with all your base layers, styles, labels, etc, configured and then load it by default, or from the file menu, and you will have everything setup. All you have to do is save the a normal .qgs project file in

~/.qgis/project_templates folder and the project will be shown in the file menu. 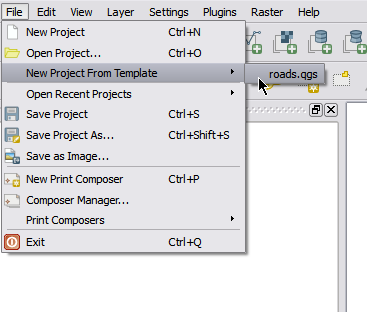 You can also set the current project as the default template:

And last but not least. This years GSoC student Arunmozhi got the improvements he had (has) been working on included into the master build. Arun was very welcoming to any feedback that Martin and I gave him about how we would like symbol stuff to work.  Anita Graser has already covered a lot of the new features over on her blog so I’m not going to go over everything again, although one thing she didn’t really touch on was the smart groups and tagging.

The tagging and smart groups are one of my favorite additions to the new symbol manager.

I love this new feature as not all the symbols I create belong to a single group so the tagging and smart groups fit this bill well.  I can now tag all the council symbols with ‘SDRC’ and include them a SDRC smart group but at the same time tag the sewer ones with ‘sewer’ and they can live in the sewer style smart group; or how about all sewer symbols that are also SDRC ones:

You can then filter by this group in the symbol selector: 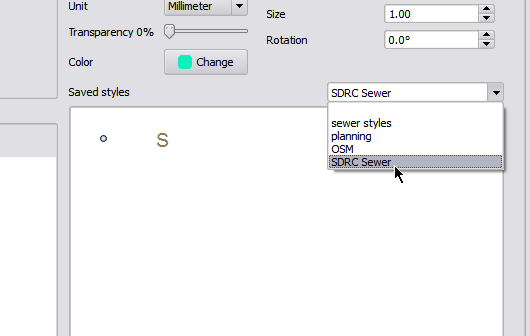 As QGIS is such a fast moving project I have decided to make this a regular blog post in order to highlight some new features added to QGIS. If you haven’t already, don’t forget to check out round one.

Remember that some of these features may still only be new which might change between now and the next official released version. With that out of the way lets get listing.

If you are a regular user of QGIS Python plugins, and who isn’t, then you would have used the awesome Atlas plugin developed by Vincent Picavet. This great tool can be used to generate mapbooks, or an atlas as some people like to say, using a coverage layer and a print composer. What makes this even more awesome is that it is now built into the print composer. 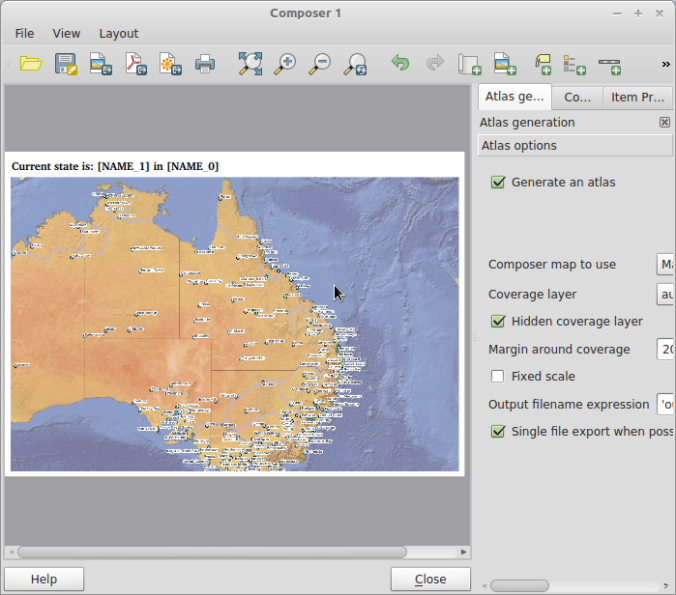 The builtin atlas function also gives you the ability to use an expression to do runtime text replacement, including access to all the fields on the coverage layer.  The coverage layer doesn’t even have to be a region layer, it can be a simple point layer, or even a line layer.   You can see the result of me running the atlas generation from the above example here

Big thanks to Oslandia for integrating this great feature, and the companies sponsoring the work.

This new addition comes from the great work that Salvatore Larosa has been doing to add a better Python console to QGIS.

The new Python console includes attribute auto complete, syntax highlighting, better copy and paste, uploading to codepad, the ability to run code from a file, etc.  You don’t realise how much difference there is until you go back to using the old one in version 1.8.

Tabbed and groups in builtin forms

One of the things I really loved about QGIS, coming from MapInfo, was the builtin forms.  Just having the ability to enter data using controls like combo boxes, calendar widgets, etc makes you one step closer to having better data.   This feature is the exact reason I setup a 67 year old for kerb data collection.

As good as they are the builtin forms have an issue of ending up with as a big scrolling list with lots of fields; also the lack of  the ability to group or put fields on tabs in the UI meant you had to create a custom form.  Well not any more.

There is now a combo box on the Fields tab that allows you to build a generated form but also add tabs and group boxes.  You can even have the same field shown more then once on the form, handy for something like an ID field that you would like to show on each tab.

With this new ability the builtin forms can get me 95% of the way for data entry jobs, the other 5% I just make a custom form – but that is very rare.

Sextante is a great and powerful analytical framework that has been added to the core of QGIS thanks to Victor Olaya.  This is not a feature that I use a lot but this is only due to most of my work being in development and not analysis, however that doesn’t mean that it’s not a really cool feature.

One of the greatest things about the Sextante toolbox is that it allows you to integrate other great open source tools like GRASS, SAGA, R, OTB, etc, right into your QGIS workflow and view the results in the canvas. It even includes a modeller so that you can build a connected diagram of all the bits of your process, even if it crosses between programs.

For me what is even better is that you can use Sextante in your plugins or custom Python code.  Sextante has a Python interface – well the whole thing is written in Python – that you can use to run a Sextante supported algorithm.

Victor has created a blog to cover some Sextante recipes at QGIS-SEXTANTE cookbook/. There are also some really cool example of Sextante in use at:

This last feature, or rather feature set,  comes from the sponsorship and support of the World Bank, Australia-Indonesia Facility for Disaster Reduction, Geoscience Australia and the GFDRR.  Most of this work was done to aid in the development of a new QGIS plugin called inaSAFE, which has also received some great praise

“(InaSAFE) is very beneficial for all of us. It’s a good example of our partnership.” Dr Susilo Bambang Yudhoyono – President of Indonesia

Some of the improvements include: 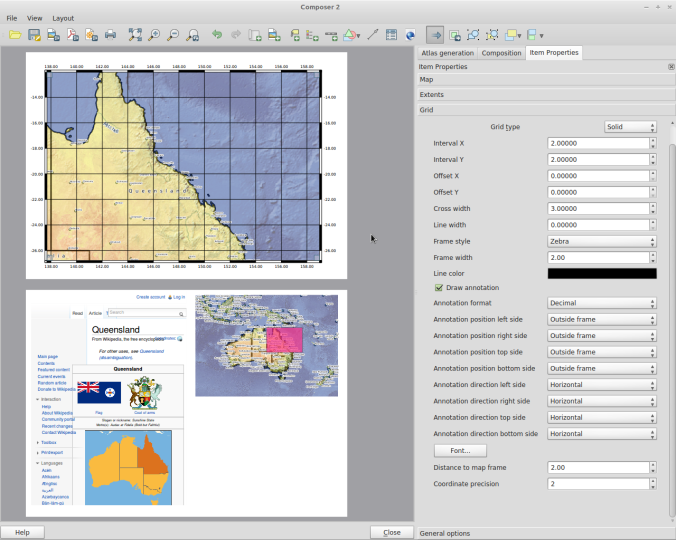 These are great additions to the QGIS composer and I have already used the overview frame feature along with the new atlas integration  to make some quick nice looking map books. \

A huge thanks to the World Bank, Australia-Indonesia Facility for Disaster Reduction, Geoscience Australia and the GFDRR, and all the developers included.

You can see some of the output that InaSAFE generates using some of these new features at http://quake.linfiniti.com/

P.S The World Bank also sponsored the new raster Save As.. ability just like we have for vector layers.

Special thanks again to Nathan Woodrow and Anita Graser for their continued support and development of QGIS.

This site uses Akismet to reduce spam. Learn how your comment data is processed.